The Fenwick Wrestling Team opened the season over the Thanksgiving holiday and have already competed in 8 duals! The Friars are a young team with many sophomores and juniors in the lineup. The challenge throughout the year will be overcoming forfeits in the lower weights.

The season opener was a Tuesday night Tri against Brother Rice and Chicago HS Ag Sci (CHAS) on the south side. After dropping the opener to Brother Rice, the Friars bounced back to defeat CHAS. The dual came down to the heavyweight match, where the team called upon sophomore and 2nd year wrestler Liam Mahon. Trailing by 4 pts, the Friars were in need of a fall to secure the win. Mahon delivered the pin-fall and helped earn the Friars first dual victory of the season!

On Wednesday, the Friars returned to the south side to take on class 2A state favorites Mt Carmel. The Caravan dominated a Friar squad who was missing many starters. Coach Anthony Poro knew his team would be put to the test, but says this is what he was looking for. "It is important for us to get CCL teams back on the schedule. It helps our boys see what we are striving to become. We will dual Mt Carmel, Providence, Marmion, and anyone else that will have us, " Poro said. One highlight of the night came on the JV level with freshman Brian Ziech defeating Donovan Corn. Corn wrestled for the successful Harvey Twister WC in 8th grade while Ziech competed for the Friar WC. Both were IKWF state qualifiers. Ziech was ahead on points when he pinned Corn in the 3rd period.

After taking Thanksgiving off, the Friars returned to action Saturday competing in the Glenbard West Dual Tournament. There, the Friars placed 5th overall. Leading the way were sophomores Adam Aguilar and Liam Mahon, who each went 4-1 on the day. Junior Sean McGee went 2-2.

Next up, the Friars will compete in the Hinsdale South Individual Tournament on Saturday starting at 9:00am. The Fr/So team will return to CHAS on Saturday for duals against Marist and St Rita as well as rematches against Mt Carmel, Br Rice, and CHAS.

Posted by Friar Wrestling Club at 9:04 AM 1 comments 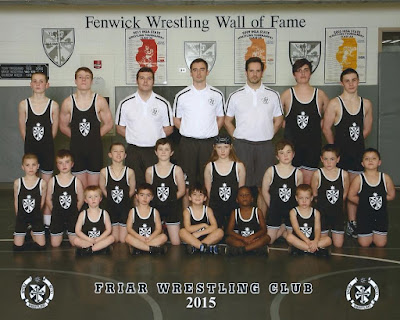 The Fenwick Wrestling Team is currently hosting pre-season workouts for all Fenwick students. If you are currently in a Fall sport, your priority is your in-season sport.

Practices are after school in the wrestling room. See Coach Poro for more information!

OUR FIRST PRACTICE OF THE YEAR WILL BE NOVEMBER 9th!!!
Posted by Friar Wrestling Club at 7:41 PM 1 comments

Fenwick Wrestling will again be participating in the Summer Wrestling League. We will work out in the room from 6:30-8:00pm Monday and Thursday and travel for competitions on Tuesdays to York HS, Niles West HS, Fenton HS, and Glenbard South HS.

All wrestling will be Folkstyle, and competitions are very informal. There will be no weigh-ins, no singlets are required, and there is no mandatory break in between matches. Wrestlers will have the opportunity to get 4-5 matches a night, possibly 40 in the whole summer!

Here is a link to the flyer

Posted by Friar Wrestling Club at 7:34 AM 1 comments

The 2014/2015 Fenwick High School wrestling season is all about new beginnings under first year head coach Anthony Poro, who has said that his goal is to develop a wrestling program, not just a team.

One of Poro's goals has been to increase the number of wrestlers in the program. "The coaching staff has done a great job of going out and getting guys into the room," said Poro. "We've been at gym classes, football practices, soccer games, and in the classrooms talking about our sport and why it is the best sport for young men to be in."

The program has also been widened to go far beyond the IHSA season. "We've completely revamped our off-season program. Our guys have committed to weight-training as well as off season wrestling. We are doing the international styles in the Spring, participating in leagues in the Summer, and working to improve in any way we can," Poro says.

Perhaps the biggest change to the Fenwick Wrestling program under Poro is the addition of a youth team for ages 5-14. The "Friar Wrestling Club" practices three days a week, right after the high school team is finished. In the club's first year of operation, there are twenty kids signed up from kindergarten to eighth grade from all over the area. "It's great to see so many young kids in the room and wearing the shield. The club will do a lot to grow the sport at Fenwick and within the community," Poro said. "We're a developmental club, and we've sent guys to everything from rookie events to the finals of elite tournaments. We're just looking to get the best out of each of our guys, regardless of  their experience."

With high school practice in the mornings and after school followed by youth practice at night, Poro can be found in the wrestling room working to improve his program at almost any time. One youth parent commented, "The boys are really lucky to have someone so willing to help them improve. It feels special knowing the coaches care about the first year five year old just as much as the high school Seniors."

Next up for the high school team is the Chicago Catholic League Conference Tournament, Saturday at DePaul Prep. The youth team will be competing this Sunday at the Collins Memorial Tournament at OPRF High School.

The first month of competition is nearing an end, and the Friars find themselves with a 3-3 dual meet record. The early part of the season has been heavy with tournaments, with the guys competing in the Guerin, Hinsdale South, and Prospect Tournaments. Here is a summary of the results:

Read more »
Posted by Friar Wrestling Club at 9:00 AM 0 comments

Through the first three duals of the season, the Friars have been in three very different positions: Outgunned against St. Rita, dominant against St. Joe's, and in a down to the wire dual against Guerin Prep. 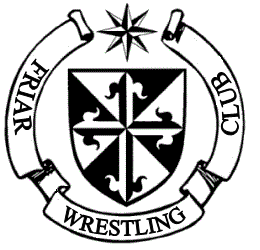